The U.S. Should Establish a No-Fault Antibiotic Injury Program.

Few inventions in the history of mankind have saved more lives than antibiotics. Antibiotics are compounds that can kill or inhibit (long enough for our immune systems to kill) microorganisms–bacteria, fungi, and protists. In 1928, Alexander Fleming discovered penicillin, a substance exuded from a humble fungus that would spawn the modern pharmaceutical industry and revolutionize our lives both in war and in peace. Manufactured in time for WWII, penicillin saved countless lives that, in previous wars, would have been lost to bacterial infection. Despite the ever-increasing deadliness of modern weapons, equally rapid innovations in medicine and pharmaceuticals, especially antibiotics, has steadily lowered the likelihood of death in war. In every American war since they started counting, more soldiers died due to disease (or accident) than on the battlefield. In the Civil War, 224,097 died of disease or accident compared to 140,414 battle deaths; in WWI, over half of the deaths were attributable to disease. WWII was the first war where more soldiers were killed by fellow man than by microorganism, with under 30% of deaths due to disease. In times of peace, antibiotics are used from the beginnings of our lives to the very end, everywhere from combating bacteria that kill women in childbirth, to fighting pneumonia that wracks our aged lungs. 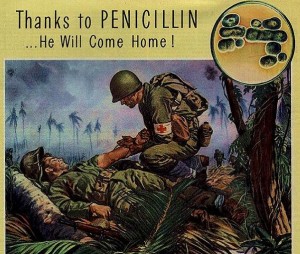 And yet these vital drugs that we daily take for granted, no longer fearing every minor scratch or major gash, are quickly running out.

The first problem is bacterial resistance. Over time, bacterial strains will naturally mutate and evolve, through natural selection, to become immune to once-effective antibiotics. This process is exacerbated when patients do not take their full course of antibiotics–feeling better, they decide to stop taking their medicine early, thus allowing the small amounts of bacteria still alive (the ones resistant to the medicine) to grow, restart the infection, and spread to other hosts. Sometimes antibiotics can be overprescribed (for example, in common cold cases), which gives bacteria exposure to the antiobiotic and starts the resistance clock. Bacteria can also get exposure through our use of antibiotics in agriculture–approximately 60% of antibiotic usage in the United States. Bacteria can exchange genes that confer resistance to antibiotics across strains, and even across species, through plasmid transfer. This enables bacterial strains to accumulate resistances, and leads to the development of multiple-drug resistant bacteria (MDRs). Bacteria could also increase their expression of resistance genes, for example, in increasing the amount of pumps that filter out the antibiotic. Microbiologist Kenneth Todar writes,

70 percent of the bacteria that cause infections in hospitals are resistant to at least one of the drugs most commonly used for treatment. Some organisms are resistant to all approved antibiotics and can only be treated with experimental and potentially toxic drugs. An alarming increase in resistance of bacteria that cause community acquired infections has also been documented, especially in the staphylococci and pneumococci (Streptococcus pneumoniae), which are prevalent causes of disease and mortality. In a recent study, 25% of bacterial pneumonia cases were shown to be resistant to penicillin, and an additional 25% of cases were resistant to more than one antibiotic.

A few famous examples of MDR bacteria include multiple-drug resistant tuberculosis (MDR TB), and Methicillin-resistant Staphylococcus aureus (MRSA). Drug-resistant TB requires treatment with more expensive and dangerous second-line TB drugs, and if the TB develops resistance to those second-line drugs as well, there are few good options for the third line. MDR TB is a serious public health problem in the developing world where the WHO is seeking to eradicate TB. Resistant staph infections are a pressing concern in the First World. In the United States, a Department of Health and Human Services study estimated 390,000 hospitalizations from MRSA cases in 2005, and researchers estimated 17,000-19,000 deaths were attributed to MRSA. It’s important to remember that despite antibiotics, infections remain the second-leading cause of death in the world, and this is a problem not limited to the Third World, but right in our backyards, in our local hospitals and community health clinics.

Despite the steadily decreasing supply of antibiotics, drug companies are not rushing out new antibiotics, nor do they have clinical trials already on track. For example, despite the resistance of gram-negative bacteria, a “study released about a year ago by the Infectious Diseases Society of America found no drugs in middle- or late-stage clinical trials directed specifically at Gram-negative organisms.”

Why are drug companies unexcited about inventing life-saving products? Antibiotics are less profitable than drugs like Lipitor and Viagra that are used to treat chronic conditions and that are chronically consumed; they are taken for short treatment courses, and doctors, cognizant of the resistance problem, are loathe to overprescribe them. Antibacterial resistance can render a drug obsolete, so drug companies must bear the risk of losing all profitability even before the life of the patent expires. 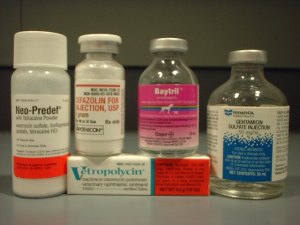 Due to the low profit margins of antibiotics, drug companies are particularly sensitive to profits that are lost from drug liability suits–the cost of hiring lawyers, and the risk of losing millions. These facts mirror, in fact, the conditions experienced by vaccine manufacturers in the 1980s. Vaccine manufacturers threatened to abandon the market because of the threat of lawsuits over vaccine-related injuries. Congress, fearing a vaccine shortage and public health crisis, passed the National Childhood Vaccine Injury Act of 1986, which shielded vaccine manufacturers from many tort claims, and established a Vaccine Court to adjudicate payment from a no-fault injury fund. Instead of suing a vaccine manufacturer and proving negligence, individuals would/must file a claim before the Vaccine Court (Court of Federal Claims) and merely demonstrate they were injured by the vaccine. If successful, they would be paid damages from the Vaccine Fund, which is funded from small surcharges on every vaccine purchase. This, apparently, assuaged the fears of vaccine manufacturers, and our nation’s (and the world’s) vaccine crisis passed. A similar system should be created for antibiotics, and perhaps it, alone, will be sufficient as well to encourage antibiotics research.

This system benefits not just drug companies, but plaintiffs as well. Under the vaccine injury program, for example, the legal fees for bringing a claim forward are reimbursed by the Vaccine Fund, not out of the plaintiff’s pocket, or out of the plaintiff’s damages check. Additionally, victims have a difficult time winning tort claims against large multinational corporations and their legions of lawyers. Companies have a huge incentive to resist and drag out even valid injury claims, for fear that one winning suit will become the seed for hundreds of others. As with medical malpractice suits, even if the odd plaintiff wins, the vast majority will lose and end up with nothing. With medical malpractice, the doctors “lose” as well because they have to spend so much money on lawyers/insurance. Analogously, drug companies lose when they are forced to spend money on lawyers despite the low profit margins of antibiotics. With an injury fund, the majority of legitimately injured claimants can receive compensation and funds for future medical care, and drug companies can keep their profits.

While shielding drug companies from liability goes against the sentiment in last year’s Wyeth v. Levine ruling, this plan is also beneficial from a regulatory point of view. If antibiotic suits are preempted, the safety judgments on antibiotics will be performed by FDA instead of state juries. Where juries see only the terrible, individual harms in front of them and may be careless in punishing drug companies (and disincentivizing their activities), FDA is in a better position to perform a holistic cost-benefit analysis of drug safety vs. drug accessibility. They see all those who would suffer if deprived of a drug, even a drug that carries dangerous risks. This concern is true of all drugs, but I think particularly true in cases of vaccines and antibiotics, where the public health concerns are tremendous.

Under this plan, the vast majority of legitimate injury victims will receive fair compensation, going through a claims court, without needing to attempt a long and painful tort process. This plan saves millions of lives, as antibiotic manufacturers, hopefully like vaccine manufacturers did in the 80s, will find a no-fault liability system sufficient to re-stimulate their investment in antibiotic research. Government subsidy of pharmaceutical research in antibiotics, and increased government grants for university development of antibiotics could also go a long way toward restoring the healthy profitability and incentive for antibiotic research, and this tort scheme would only serve to supplement any additional incentives the government could enact. These life-saving drugs could perhaps become even cheaper as drug companies no longer need to create legal war chests in case of tort suits, or no longer need to front the whole sum of R&D costs, increasing the availability of these drugs in the Third World, and saving millions more lives abroad.

In these times of corporate repugnance, it seems distasteful to erect yet another shield for large businesses to protect themselves from judgment at the hands of the people, before twelve angry men. Yet the alternative, a shortage of novel antibiotics to combat newly-mutated bacterial strains, is far more perilous to the public health.

6 thoughts on “The Antibiotics Shortage and How to Solve It.”