It may have appeared that, as with many things, I abandoned prematurely my plan to write about all the hoity-toity literature I’d been reading. Surprise! I’d just been reading even hoitier, toitier literature (indeed, the hoitiest) such that it delayed my blog post. I’ve been reading War and Peace.*

END_OF_DOCUMENT_TOKEN_TO_BE_REPLACED

As a huge fan of Calvin and Hobbes, I had always wanted a Hobbes doll of my very own. However, given Bill Watterson’s strong stance against licensing Calvin and Hobbes (and my desire to respect his reasons for refusing to merchandise his strip), this proved to be quite the dilemma. Ultimately, I realized that if I really wanted Hobbes, I would have to make him myself. And so I did — and it proved to be one of my most rewarding experiences in recent memory. In this post, I provide a how-to (along with words of encouragement) for other people who might be interested in making their own Hobbes dolls (or other amigurumi dolls).

First and foremost: yes, it is completely possible for a an absolute beginner to crochet to just plunge into making Hobbes. Not only did I have no crocheting experience coming into this, but the last time I touched any form of arts and crafts was in middle school. Second, the time frame: I finished my Hobbes in a month (working only on weekends), and I would say that the whole project took roughly 30 hours, which includes the learning curve and a few mess-ups here and there that I had to undo.

I worked mostly off sukigirl74’s free crochet pattern (this site explains how to read a crochet pattern). However, I did improvise at a few points to get my doll to look more like Watterson’s drawing, which is why my doll looks different from hers. I also cheated and super-glued (rather than sewed) the black felt, muzzle, and white tummy on. Sukigirl74’s preface is worth repeating here: “The reason he is free is because the creator of Calvin and Hobbes, Bill Watterson did not want to commercialize his work, so keeping that in mind, please don’t sell this pattern and don’t sell the completed work. I feel that part of enjoying Calvin and Hobbes is also respecting the man who created it. So this pattern is offered to people who want to make Hobbes for themselves or a loved one.”

Getting Started — The Links and Videos I Found Helpful:

(1) The basics of crochet: I would recommend spending at least 15 minutes practicing these stitches and unraveling. You will then know enough to plunge directly into making Hobbes, starting with the magic loop (which is required for the first step of the pattern).

(2) How to make a magic loop. The magic loop is going to be how you begin Hobbes’ head (and most of his other body parts). To help you better visualize what you will be doing: you are starting from the very top of his head (see picture)

and adding circular rows that are gradually increasing in diameter until halfway through, when you will start gradually decreasing, in order to get the spherical shape. I watched the following videos (the best I could find) over and over again and stared at the diagrams in frustration for a good while before I finally figured out how to do a magic loop, so don’t get discouraged!

(4) How to decrease stitches (super-easy).

I’d like to end with two final notes of encouragement. First, there is something extremely satisfying about creating something from complete scratch — a satisfaction I’ve also derived from activities like web programming, graphic design, and layout — and which I’m sure others derive from activities like cooking or baking. I would highly recommend trying one such activity (especially for those who are in a profession or line of study where you feel like you’re stuck navigating through the trees without seeing the forest or where it can be difficult to see what the final product is). Second, sometimes you just have to plunge in. Is there something you’ve always wanted to do? I spent $25 on yarn on a whim after winter break, figuring I would make myself learn once I had the materials, and not only do I now finally have a Hobbes doll but I am on my third crochet project. Anyway, I would urge you to just “go for it” (whatever “it” may be)!

I’d be happy to answer questions in the comments (even if you’re stumbling upon this post a year from now). Happy crocheting! 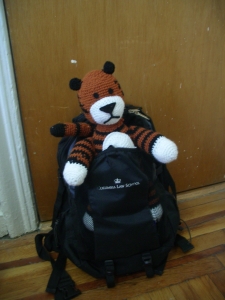